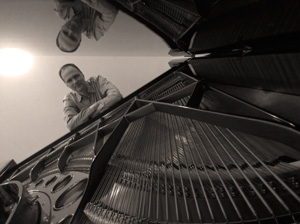 Music, and pianos in particular, have always been hugely important to me. I have fond memories, as a small child, of falling asleep listening to my Dad playing the slow movement of Beethoven’s wonderful Appassionata sonata on the piano (not that he got past the second variation!).

I have always had a particular passion for Beethoven; other standout composers for me would include Rachmaninov, Liszt and Chopin. And while I’m not much of a fan, there is also a definite minimalistic influence on my own compositions. Hopefully as time goes on I can bring you some of my favourite pieces.

I was born in 1981 in Edinburgh, Scotland, to parents of Scots Irish and Estonian descent. After schooling in Edinburgh I went to Glasgow University where I studied music, completing first a BMus and then an MMus focusing on composition and historical studies. It was there that I met and married my wife Rhiannon. Together we have had two lovely daughters, Faith (2007-2009) and Zoe (2013-).

Following University I worked for a small Edinburgh-based software company, Runtime Revolution Ltd, as Webmaster and System Admin. This enabled me to upgrade my piano, and in doing so rekindle my long-held musical ambitions. In 2008 I started to transition to part-time work to enable the initial development of this site, and since the end of 2012 I’ve been able to work full time as a musician (well, more or less full time…), both as pianist and composer, and also as organist of St John the Baptist, Scottish Episcopal Church, Perth (not to be confused with other more famous churches in Perth, also called St John’s).

Outside the musical sphere I enjoy cooking (especially Thai and Italian), Star Trek, reading Sci-fi and Fantasy, Rugby Union (watching not playing), and adventure roleplaying. I’m a particular fan of the Elder Scrolls series of games – and in fact Jeremy Soule is one of the few living composers whose music I actually like!

It is an inescapable fact that one cannot develop the necessary skills to be a classical musician without support and I would like to take the opportunity to thank the people who have so generously contributed to make my dreams a reality. Buying a piano of professional standard, even second hand, comes to tens of thousands of pounds and would not have been possible without the very generous assistance of my parents-in-law Hubert and Elizabeth Macfie, my aunt Helgi Öpik, and my own parents Tiiu and Patrick. Hubert and Elizabeth have also been extraordinarily kind with such ‘minor details’ as childcare. Greatest thanks must though go to my wife Rhiannon who has supported and encouraged me throughout, not to mention having an actual job that pays real money!

I would also like to thank some of the people who have helped in technical ways to make this project happen: Edinburgh Piano Company who sold me my beautiful piano and Norman Motion who tunes and maintains it, Ben Seven who created the original site design, Eilidh Harris who assisted with sheet music typesetting, and Rhiannon (again) for helping to build the website.

My development as a musician has taken years of work, and input from quite a few people. Thanks should go to my sister Agnes who first suggested I learn the piano (when I was 7), and also to my Dad who gave me my first lessons. Since then I have had tuition from a number of professionals: Kathryn Hutchon ("Play the piano with your ears, not your hands!"), David Leslie ("Cut your fingernails!"), and Isobel Anderson ("What are your favourites?"). They have been both educational and inspirational and I'm grateful for their input and guidance. I also learned quite a bit while studying at Glasgow University. In particular I'm grateful to Professors John Butt, Bill Sweeney, and Marjorie Rycroft, and to Dr Martin Dixon who helped my development as a musician.

I hope you like my music.
I need your help to make more.

Join me today and with your support I can write and publish more inspiring music.

For full access to download all the music on this site you need to login or join Ilmar Music.